You are here:  Home>Electromagnet Solenoids>How To Identify The Solenoid Magnetic Field
How to identify the solenoid magnet...

How to identify the solenoid magnetic field 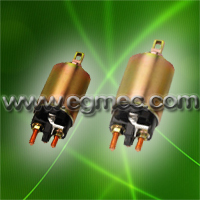 How to identify the solenoid magnetic field, we need to understand the Ampere Rule, the Rule is said to stimulate the current and current direction of the magnetic field lines of magnetic induction is the relationship between the set is usually called the right-hand screw rule.

It reads as follows:
1. Straight wire in the power Ampere Rule, that is, straight wire with his right hand holding the power, so the thumb points to the current direction, the four fingers pointing is the direction of magnetic induction loop line.
2. Power amp in the solenoid is given, the solenoid is energized with the right hand holding, so that four fingers bent and current direction, the thumb is the power within the meaning of that end of the solenoid of N pole.
3. The nature of the current amp is a straight line is a short straight line given the current may be used. Ring current can be seen as composed of many small pieces of line current, a short line for each current line of amps with the judge setting the central axis of the ring current magnetic sense of direction. The ring can stack up to the central axis of the magnetic current sense of direction. And linear current amp set is basic, ring current amp set is a straight line current amps set the export line current amps set is the charge for the linear motion generated by the magnetic field is applied, at this time the current direction and are movement direction is the same charge, and negative charge movement in the opposite direction.


Previous:   The use of industrial solenoid Next:  The description of electromagn