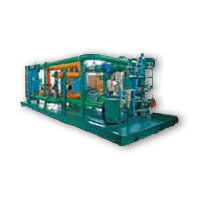 1. The hydrodynamic lubrication:
Into the friction surface by the rotation of the bearing Vice journal lubricating oil, hydraulic fluid dynamic action of the wedge-shaped gap formation of the lubricating oil viscosity and oil bearing Vice, namely the formation of the bearing oil film, called hydrodynamic lubrication. Assumptions of hydrodynamic lubrication theory is the viscosity of the lubricant, the viscosity of the lubricating oil at a certain temperature does not vary with changes in pressure and change; followed by the assumption that students relative friction movement of the surface is rigid, ie by upload and film pressure, without regard to its elastic deformation. Under the above assumptions, the general non-overloaded (sliding bearing contact pressure of 15MPa), this assumption is close to the actual situation. However, in the rolling bearing and gear surfaces contact pressure increased to 400 ~ 1500MPa, the above assumptions with the actual situation. Then the deformation up to the film thickness of the friction surface several times, and the elastic deformation of the metal friction surface lubrication and lubricants viscosity change with pressure of these two factors, to study and calculate the pattern and thickness of the film formation, film cross-section shape and The pressure distribution within the film more with the actual lubrication on called elastic hydrodynamic lubrication.

2. Static pressure lubrication:
By a high-pressure hydraulic oil supply system will have a certain pressure of lubricating oil to the holidays flow damper, forced for the gap of the friction surface of the deputy campaign (such as hydrostatic slide bearing clearance, the plane hydrostatic slide guide the gap, the gap medium static pressure screw). Not yet started the movement, the friction surface by high-pressure oil separated, forced to form a film, thus ensuring the deputy campaign can withstand a certain load conditions, completely in the state of the liquid lubrication, the lubrication is called hydrostatic lubrication.