Brief introduction of the electromagnet solenoids 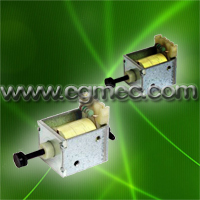 It is very easy to find the principle of electro-magnet for the manufacture of products such as electromagnetic relays, magnetic crane, magnetic levitation trains, which relies mainly on the current magnetic effect, is through the so-called solenoid coil current with the magnetic core inside. Within the core must be easy magnetization and demagnetization of the soft iron or easy to silicon.

The electromagnet solenoid works inside the solenoid is inserted in the power of the core, the core will be energized solenoid magnetic field magnetization. After the core is magnetized to become a magnet, so that the superposition of two magnetic fields, the magnetic will be greatly increased. If you want a stronger magnetic solenoid, usually made of hippocrepiform the core, but the core of the coil winding in the opposite direction is necessary, that is, when one side is smooth, one side is a reverse-time. Because it will spiral around the coil to the same core of the magnetization of cancel each other out, so no significant magnetic.

In addition, the electromagnet core is not to produce steel, because steel is magnetized, the magnetic and will not be long-term demagnetization, and magnetic strength of the current can not be controlled, which lost the benefits of magnet applications.

Previous:   Invention of wet solenoid for Next:  The influence factors of elect