The history of electromagnetic solenoids 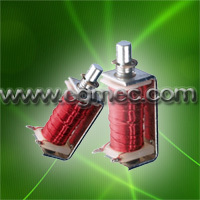 In 1822, French physicist Arago and Lussac found that when the current through the winding of which iron, it can wound the iron magnetization. This is actually first discovered the principle of electromagnet. In 1823, Sturgeon also made a similar experiment: he is not in a U-shaped iron bar magnet stick around for 18 laps on the copper wires, copper wire and voltaic cell when switched on, around the U iron bar type copper coils that generate the intense magnetic field, thus making the iron bar into a U-shaped "electromagnet."
This permanent magnet on the magnetic energy than can large release times, it can pick up more than 20 times its weight of iron, and when the power is cut off, U-shaped iron bar on what iron absorption also could not again become an ordinary iron bar. Sturgeon invented the electromagnet, so that people see the electrical energy into magnetic energy of a bright future, this discovery was soon in the United Kingdom, the United States and Western Europe, spread to a number of coastal countries. In 1829, the U.S. scientist Henry Sturgeon electric solenoid device a number of innovations, instead of bare copper wire insulated wire, copper wire so without fear of being too close to the short circuit.

As the wire with the insulation, they can be a circle around the enclosure tightly together, the more intense because the coil, the stronger the magnetic field generated, thus greatly improving the ability of electrical energy into magnetic energy.

To 1831, Henry trialed out of a newer electromagnet, although its size is not large, but it can pick up the one-ton of iron. After years of improvement and technology maturity by gradually now form the electromagnet.