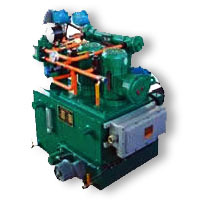 Lubrication equipment plays an important role in the normal operation of the industrial machinery and equipment.
(1) Reduce the friction coefficient:
Join between the two opposite friction surface lubricants, anti-friction layer to form a
film can reduce the coefficient of friction, to feed the friction resistance, and reduce power consumption. Liquid friction conditions, for example, the friction coefficient can be as low as 0.001 or even lower. The friction resistance is the main internal molecules of the liquid lubricating film between the sliding low shear resistance.
(2) To reduce wear:
Lubricant between the friction surface, you can feed durum wear, surface rust, welding and tear between the metal surface bite caused by wear and tear. Therefore, an adequate supply of lubricant between the friction surface, we can form a good lubrication conditions, to avoid film damage, keep the parts with the precision, thus greatly feed the wear and tear.
(3) Lowering the temperature:
Lubricant to reduce friction coefficient, to support the generation of friction heat. We know that the operation of the machinery to overcome the friction between the work done, all transformed into heat, part of the outward diffusion from the body, part of the continuous mechanical temperature. The concentration of circulating lubrication system using liquid lubricants can take away the heat generated by friction, a cooling quasi-but, the mechanical control operation in the temperature range required.
(4) To prevent the corrosion protection of metal surfaces:
Mechanical surface, will inevitably have to contact and the surrounding medium (such as air, moisture, water vapor, corrosive gases and liquids, etc.) so that the machinery of the metal surface rust and corrosion damage. Especially in high temperature metallurgical factory workshop and chemical corrosion and wear is even more serious.
(5) Clean the flushing effect:
Wear particles generated by the friction pair in the exercise or the foreign media will accelerate the friction surface and wear. The fluidity of the liquid lubricant, the friction surface between the abrasive away, thereby reducing the abrasive wear, pressure on the circulatory system, the flushing effect is more significant. Process lubricants in the process of cold-rolled, hot-rolled, as well as cutting, grinding, drawing, in addition to cool the cooling effect, there is good flushing effect to prevent the surface to complement the solid impurities scratch, so that the finished products (steel The) surface has good quality and surface roughness. Suspension dispersant additives such as the lubricating oil used in internal combustion engine cylinder, so that the oil generated in the gel and coke from washing down the cylinder wall, and make it fragmented into small particles suspended in oil, along with the circulating oil filter to keep the oil clean, reducing the wear of the cylinder to extend drain intervals.
(6) Sealing effect:
Steam engines, compressors, internal combustion engine cylinder and piston, lubricating oil not only lubricates the friction reducing effect, but also enhance the effect of sealing operation, leakage, improve the efficiency of the role.

Grease a special role in the formation of sealed to prevent moisture or other dust, impurities immersed in the friction pair. Such as the use of oil-immersed with grease packing, head of the pump shaft seal both good lubrication, but also to prevent leakage and dust impurities immersed in the pump body and play a good seal.
In addition, the lubricating oil is there to reduce vibration and noise performance.